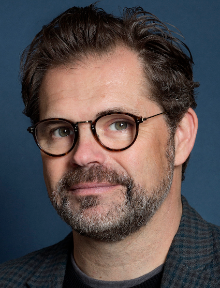 Dana Gould began his professional comedy career at the age of seventeen. Between Comedy Central, HBO, and Showtime, Dana has seven solo stand-up comedy specials to his credit. He has appeared on "The Late Show with David Letterman," "Jimmy Kimmel Live," "CONAN," "MARON," and "Real Time with Bill Maher." As an actor, Dana has had memorable turns on "Seinfeld," "Parks and Rec," and was a cast member of Frank Darabont’s 1940’s crime drama "Mob City," as well as numerous roles in films, such as the cult horror anthology "Southbound." Dana was a writer/performer on the original "Ben Stiller Show" and maintains an equally active career as a writer. Dana wrote for "The Simpsons," where he was a co-executive producer and performed several voices for the show. He was also a producer on NBC's "Parks and Rec." In 2016, Dana created the show "Stan Against Evil," which he is wrote and executive produced for IFC. Despite all this, stand-up remains a focal point of Dana’s career, and he continues to perform regularly across the country. His monthly podcast, "The Dana Gould Hour," frequently resides in iTunes' top ten comedy downloads.

I was born and raised in the ironically-named town of Hopedale, Massachusetts. I started performing stand-up comedy at the age of 17, three short weeks out of high school. As a performer, I was too young to be any good. As a person, I was socially inept and looked weird. Let's skip ahead!

Eventually, I got my groove on. And my friend, on it has stayed!

I attended U-Mass, Amherst for a couple years, and then dove head-first into the halcyon days of "The Comedy Boom". I moved to Los Angeles in the dawning years of the go-go 90's, and was fortunate enough to be on the receiving end of several network development deals. The goal here is to get a comedian, hook him to a writer, and have them create a TV pilot. Over time, I had my hand in more pilots than an Air Force proctologist.

In 1992 I wrote and performed an autobiographical one-man show called Insomnia. It was a genuine, theatrical one-person show, not just my stand-up act with a chair and a lamp. The show told the story of the events in my life that lead to me becoming a person so fascinating that I warranted a one-man show. I look back on Insomnia now as a youthful indiscretion that I kind of regret. But it was too late, for by this time I had honed my whining to an art form, and I had become white-hot in the business. I was all sizzle and all steak. You read that right.

In quick succession, I performed in several HBO specials, as well numerous guest appearances on Late Night With Conan O'Brien and The Late Show with David Letterman . I recorded the CD Funhouse, which was called "a comedy CD" by Billboard magazine. As an actor, I appeared on Seinfeld and The Ben Stiller Show. I was a series regular on the NBC series "Working" (which wasn't, and was soon cancelled).

Along the way, I discovered that the writing process was a lot more creatively fulfilling than acting was. Acting requires getting up before dawn and sitting around all day in a small trailer with a waterless toilet. That said, you get to wear make-up!

After writing the pilot "World On A String" (with Jay Kogen), I co-created MTV's late, lamented, Super Adventure Team (with Rob Cohen). I then joined the staff of The Simpsons, where I squatted for seven years. Stand up remains a big part of my career, and I continue to perform regularly. I recently appeared in the film "The Aristocrats". and am preparing to record my next stand-up CD. I live in Los Angeles with my wife and a bunch of kids and dogs, many of them ours.