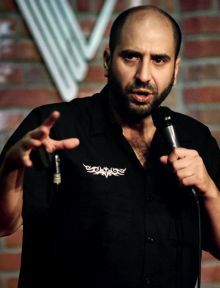 Dave Attell is a stand-up comedian, actor and writer, best known as the host of Comedy Central's "Insomniac with Dave Attell," which gave him a cult following. He can next be seen in the Hulu series "Life & Beth" alongside Amy Schumer, Michael Rapaport, and Michael Cera. He can also be seen on "Bumping Mics" with Jeff Ross, currently streaming on Netflix, and HBO’s "Crashing" with Pete Holmes. His stand up series, "Dave Attell's Comedy Underground" and his one hour special, "Road Work" were featured on Comedy Central and "Road Work" is now streaming on Netflix.

His film credits include Chris Rock’s cult film, "Pootie Tang," "Funny People," "Scary Movie 4," and "Los Enchuladas," as well as the Amy Schumer films "Trainwreck" and "I Feel Pretty." His television credits include,"The Simpsons," "Difficult People," "Bob's Burgers," "Arrested Development," "The Jim Gaffigan Show," "The Jim Norton Show," "Inside Amy Schumer," "Louie," "Ed," "Everybody Loves Raymond," and "Tough Crowd with Colin Quinn." He was named one of the “25 Funniest People in America” by Entertainment Weekly Magazine. When not on the road, Attell makes regular appearances at the Comedy Cellar in New York City.

Born in Queens and raised on Long Island, Dave Attell got into stand-up comedy in the late eighties after graduating from New York University with a degree in Film and Television. Attell used this prestigious degree to land amazing jobs in the food service industry - as a waiter. At night he would hit the "open mic" circuit in Manhattan. After many years, Attell worked his way up through the club scene onto the road, touring across America as a national headliner and developing a huge following among fans and the industry alike.

He was named one of the “25 Funniest People in America” by Entertainment Weekly Magazine. His caustic wit, rapid-fire delivery and his choice of material that can best be described as "very adult" has earned him the reputation as a "comic's comic." But if you ask Attell, he’d say, "I’m just trying to get some laughs and sell some drinks."

In 2001, Attell used this love of booze and laughter to create and host the hit series, "Insomniac with Dave Attell" for Comedy Central. A travelogue show in which Attell goes from city to city looking for late-night fun, The New York Times called the show, "a doubly rare beast, a comedy without rancor and a travel show about the virtues of the American underdog." To Attell, the Insomniac show is more of a cross between "Girls Gone Wild” and “Cops”.

After four seasons of “Insomniac,” Attell taped several hour-long “Insomniac” specials overseas in Japan, Germany, England and Brazil. Once back in the states, he headed out on a thirty-five city theatre tour ending in Vegas, where he hosted a two-hour special for Comedy Central featuring Sean Rouse, Greg Geraldo and Dane Cook, some of the biggest comics in the country.