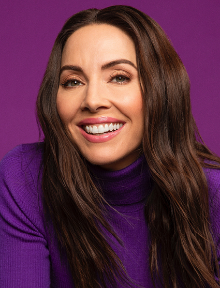 Whitney Cummings is a comedian, writer, and actress who has performed in stand-up specials for both HBO and Comedy Central. Best known for creating and starring in the NBC series "Whitney," Whitney was also the co-creator and co-writer of the Emmy-nominated CBS comedy series "2 Broke Girls" and was an executive producer on the ABC revival of "Roseanne." Her first book, "I'm Fine and Other Lies," is available wherever books are sold and her film directorial debut, "The Female Brain," is available for streaming.

Due to capacity restrictions and recommendations by local authorities and in the interest of social distancing, we will be selling tables rather than individual tickets to our events. At this time, customers will not be sharing tables with anyone other than their party. Tables are maxed out at 4 people per table. In the event more than four people are attending a show together as a group, you will be separated into multiple tables and these tables will maintain social distancing rules.

Each table comes with the corresponding number of tickets:
2 person = 2 tickets | 4 person = 4 tickets

Customers are expected to take necessary precautions to protect themselves and others. Per the CDC and local governments, we request all customers enter the facility wearing a face covering or mask. When customers are seated, they are permitted to remove such covering.

Hailed as “the reigning Queen of American stand-up,” Whitney Cummings is one of the preeminent comedic voices currently working as a stand-up comedian, actor, writer, producer and director. Best known for creating and starring in the NBC series “Whitney,” she also co-created and co-wrote (with Michael Patrick King) the Emmy-nominated CBS comedy series “2 Broke Girls.”

Last year, Whitney launched her own podcast titled “Good For You” and debuted her fourth stand up special, “Can I Touch It?” on Netflix. Previous specials have debuted on HBO and Comedy Central. In addition to co-writing and directing the feature film “The Female Brian,” she also stars alongside Sofia Vergara, James Marsden, Lucy Punch, Toby Kebbell, Cecily Strong, Beanie Feldstein, and Blake Griffin. The film details the inner workings and complex power of brain chemistry among couples at different stages of their relationships. It premiered at the Los Angeles Film Festival and was distributed by IFC.

On the big screen, Whitney was last seen in “Unforgettable” for Warner Bros. Past feature film credits include “The Wedding Ringer,” “Made of Honor,” and “The Ridiculous Six.” Whitney has appeared in such series as “Undateable,” “Workaholics,” “Maron” and the Comedy Central Roasts, which have solidified her presence in comedy television. She has made countless other television appearances on talkshows such as “Watch What Happens Live,” “The Tonight Show with Jimmy Fallon,” “The Kelly Clarkson Show,” “The Late Late Show,” and she’s appeared on and guest hosted “Jimmy Kimmel Live.” The continued success can be attributed to one thing, as explained by Glamour Magazine: “One thing has remained constant in this career: Whitney says it as it is, …and OWNs stand-up comedy.”

Whitney is currently touring the US on her sold out Codependence Tour.