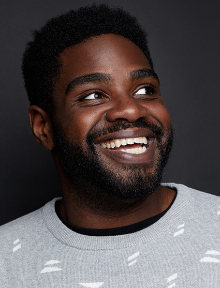 Ron Funches is a triple threat. He is an excellent stand-up comedian, actor, and writer.

Ron has built an impressive acting resume. Whether it's lending his voice to projects like "Trolls," "Bob's Burgers," and "Adventure Time." Or his memorable acting roles on "The Goldbergs," "Black•ish," "New Girl," "Transparent," "Powerless," and "Undateable." He even made being a gang member likable in the film "Get Hard."

His personal appearances include "Conan," "The Tonight Show," "@midnight," "Chopped," "Cupcake Wars," and many more.

Ron is a great writer too. His writing credits include "The Eric Andre Show," "Kroll Show," and several television pilots. He currently has a one-hour comedy special on Comedy Central.

Ron is also a pretty solid dad and friend. He lives in Southern California with his son.

Customers are expected to take necessary precautions to protect themselves and others. Per the CDC and local governments, we require all customers to enter the facility wearing a face covering or mask. When customers are seated, they are permitted to remove such covering while eating or drinking.

Ron Funches is a very funny stand up comedian with a unique delivery and lovable demeanor. You just want to hug and squeeze him like a big stuffed bear. His easy going, inventive style sounds the way fresh chocolate chip cookies taste. Ron performs stand up all over the United States impressing audiences everywhere.

You may know Ron from NBC’s POWERLESS. Ron’s other television appearances include, starring in NBC’s UNDATEABLE, recurring roles on Comedy Central’s @MIDNIGHT, THE KROLL SHOW, DRUNK HISTORY ABC’s BLACKISH and many more. Ron has multiple stand-up performances on TBS’s CONAN O’BRIEN SHOW and NBC’s THE TONIGHT SHOW WITH JIMMY FALLON.